The network of autonomous polygons

PUT among the signatories of the agreement for construction and development of the network of autonomous polygons. The agreement signed by the prof. Teofil Jesionowski, the Rector of the Poznan University of Technology, included support for the development of unmanned systems technology in Poland and stimulation of scientific and research as well as business cooperation by making available specialized, previously unavailable test infrastructure.

The creation of the NETWORK OF AUTONOMOUS TECHNOLOGY POLYGONES will be yet another step toward accelerating research on the market for autonomous machines. Poland, as a leader in drone technologies, needs modern solutions that will facilitate further development of this promising branch of the aviation industry, which is unmanned aerial vehicles - said Dariusz Werschner, plenipotentiary of the Ministry of Infrastructure for Unmanned Aerial Vehicles.

The NETWORK OF AUTONOMOUS TECHNOLOGY POLYGONES is created with innovative business entities, construction and academic teams, whose projects have not been fully tested so far due to their unusual nature. The network will make it possible to test not only unmanned flying machines but also driving and floating machines. Entities with resources relevant to testing autonomous systems and willing to cooperate by sharing their resources, exchanging knowledge and experience, or implementing joint ventures and projects, may apply to join the Network. These requests may be submitted to the plenipotentiary of the Minister of Infrastructure for unmanned aerial vehicles.

More information is available at: 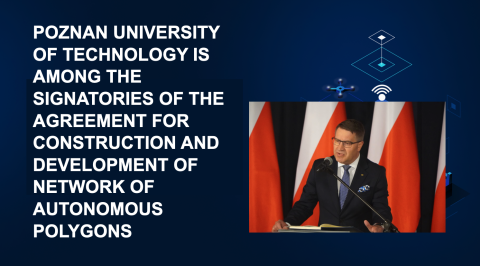