YOUNG RESEARCHERS FROM PUT AWARDED BY THE PAS

Piotr Kuwałek, PhD from the Faculty of Automatic Control, Robotics and Electrical Engineering and Przemysław Galek, MSc. from the Faculty of Chemical Technology were awarded and honoured in the 10th edition of the competition for the best creative work with the leading participation of doctoral students. On 7th June 2022, the Poznan Branch of the Polish Academy of Sciences organized the 100th session of the General Assembly combined with the celebration of the 50th anniversary of the establishment of the Branch.

The ceremony took place at the Działyński Palace in Poznan. During the ceremony, the President of the Poznan Branch prof. Marek Świtoński, presented the history and achievements of the unit in the field of popularizing and promoting science, which significantly fit into the cultural and scientific map of Poznan.

It was also an opportunity to appreciate the scientific achievements and contribution to the development of the Poznan Branch of the Polish Academy of Sciences of the former president, prof. Roman Słowiński from the Poznan University of Technology. Prof. Słowiński received the distinction "For merits for the Wielkopolska Province” handed by Marek Woźniak, the Marshal of the Wielkopolska Region.

the second from the left is prof. Roman Słowiński 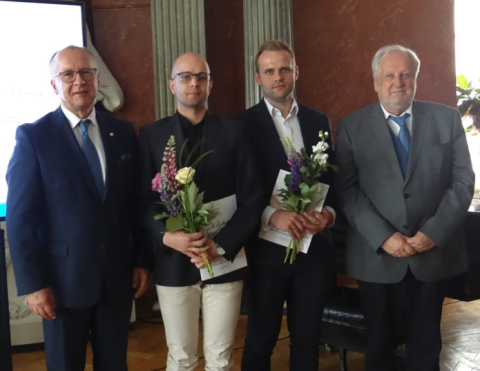